What is citizen science? Expand

The concept of citizen science is explained in the following explanatory movie:

In short, this means that citizens contribute to the process of science. This can be in defining research questions, analyzing data or, which we do in BigO, collecting data

What is Big Data? Expand

Big Data refers to large volumes of data that are complex and difficult to analyze. It often contains data from different sources and formats. In the BigO project, for example, these are the large amount of pictures of the meals, the timing of these meals, pictures of food advertisements, and accelerometer data that is collected by our young citizen scientists.

Data is often classified as Big Data on the basis of five V’s:

What is the impact for society if I, as a teacher, participate with my class? Expand

By participating in the project, you will give researchers more insight in de eating behaviors and the physical activity of the children in your city/neighborhood. Based on this Public Health Authorities can decide on their policies. They may use the data to help to prioritize public health interventions, e.g. to investigate whether it is valuable to set policies around the presence of fast food outlets in the neighborhood of schools. Next to this, using the app in an assignment will make them more aware of their (un)healthy behaviors. It can open doors to start discussions around healthy behavior in class. Currently there are good practices of use of the BigO app by the schools. Please send us an email to learn more: [email protected]

I cannot see how the BigO app could help getting a better understanding about obesity. Can you explain this to me? Expand

The reasons why some children become obese are complex. Behaviour is, amongst others, influenced by many factors in our living environment (such as transportation options, food advertisements, safety, food prices, et cetera). In turn, the living environment is affected by public health policies. Combined, these are components that determine obesity rates. BigO collects and analyses anonymous data on children's behavioural patterns and their living environment. Data from individual children is combined with geographical data from national statistics agencies. By using advanced analytics and sophisticated visualizations BigO extracts data-driven evidence on which local factors are involved, and how these factors influence childhood obesity across Europe.

I assume that you want accurate and useful data for your project. How can I support my child to be a good participant? Expand
Phone and tablet use is not good for children’s health, why do you use these devices for health research? Expand

In myBigO app, students answer questions, take pictures of food advertisements they encounter, and of the foods they consume. This only takes a few minutes per day. Children will use their tablets and phones with a specific goal; it will make them more aware of their (un)healthy behaviors. For schools participating in the project it can open doors to start discussions around healthy behavior in class. For children that use the app while visiting a clinic, it provides a tool to the health professionals. It adds objective measurements of the behavior of the child. It helps them to prioritize the interventions they can undertake to support the child in changing its behavior.

How does BigO improve the health of my child? Expand

The BigO project does not affect the health of your child in a direct manner. Participating with the project means that you give researchers more insight in the physical activity and eating behaviors of children in your neighborhood. Based on this Public Health Authorities can decide on their policies affecting the environment.

To get rewarded in the app, children should take pictures, it is not by eating healthier or exercising more, is this correct? Expand

This is correct. It is not the intention of the project to change children’s behavior. The idea is that children contribute to the project by providing data on their regular behavior. Contributing data in terms of uploading pictures is helping the project and is therefore rewarded by means of a change in citizen science status.

When does my child get the status of “bronze”, “silver” or “golden” citizen scientist? Expand

The citizen science status of a child depends on the amount of data that is collected and contributed to the project. It is not the intention of the project to change children’s behavior. The idea is that they contribute to the project in terms of data collection. All children start with a normal status, with an avatar. A child deserves the “bronze” status when he or she reaches 38,000 points; the “silver” status if he or she reaches 57,000 points; and finally “gold” if he or she reaches 76,000 points. The points are awarded for having GPS location on, uploading food images, and answering the daily questionnaires. 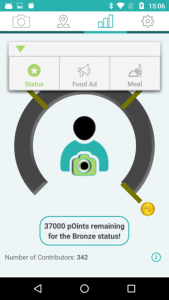 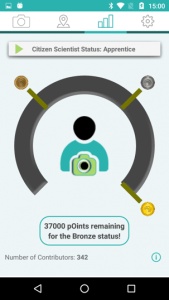 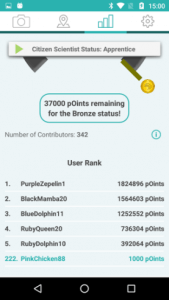 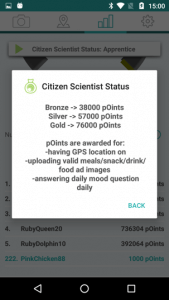 How does the app collect data on physical activity? Expand

The app collects data on physical activity by means of the app. When installed and registered; the app is active on the background and collects GPS data as well as accelerometry data. When connected to Wi-Fi the app sends the activity and location data to the BigO server. On the server this data is averaged and summarized for all kids per so-called geohash, that is a geographic area. So when a lot of kids use the app, we know the average activity of kids in a certain geographic area compared to another area. None of the data can be directed towards an individual child.

How does the app collect data on eating behaviors? Expand

The child makes pictures of foods and drinks that they consume. Together with the picture metadata is uploaded. Meta data is for example the time and day that the picture was taken, and the geohash-based location of the picture. Furthermore, the child enters via the app the type of meal and whether it was home prepared or bought. In this way we can see at what time the children are eating their breakfasts, lunches, dinners and snacks, but also what type of meals they consume. From these data we can for example already observe that children in Greece eat their dinners much later than children in Sweden.

What do you do with the pictures that are uploaded? Expand

All the pictures that are uploaded in the system are first checked and approved by the BigO researchers. They are checked on appropriateness, quality and usability.

The pictures can be accessed by the teachers via the web portal and can be used for educational (school) or coaching (dietician) purposes. In addition, the pictures can be used by researchers to derive information about the food environment and eating habits of children living in specific areas, cities or countries.

Why do you want to collect pictures of food advertisements? Expand

Privacy is an important issue for the BigO project. As we work with data collected by children, this has our attention from the beginning of the project. Therefore the projects architecture is designed in such a way that the data can never be traced back to the individual. No names or address information is stored in the app. All children use nicknames in the app. The web portal is password protected and also does not contain any names or addresses.

Where is the data stored on the phone? Expand

All data is stored within the BigO app, and erased after being uploaded to the BigO servers in an anonymized format. Also the pictures that are taken with the app will go to a dedicated location in the BigO app.

Who are our data protection officers? Expand
Scroll To Top